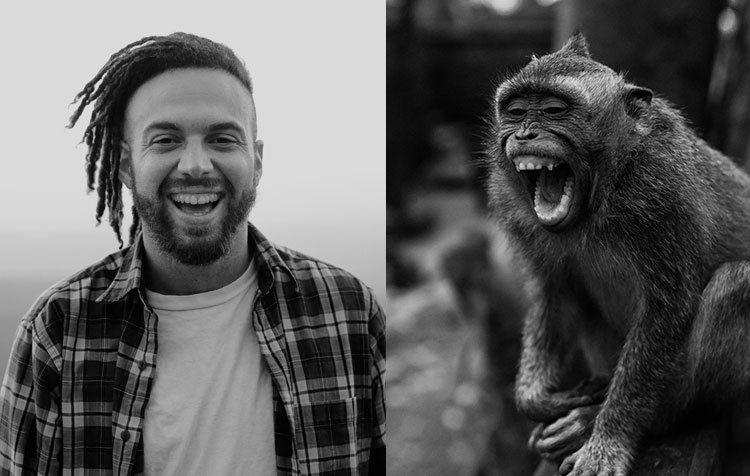 You want to know if animals can laugh too? Then you've come to the right place! When we laugh, we widen our mouths and show our teeth, while laugh lines appear around our eyes and we ourselves make typical laughing sounds. We do this when something amuses us or gives us pleasure, to encourage others to laugh along, but also to relieve ourselves in situations of tension. Laughter is an innate emotional expression of us humans - and is especially important for communication in the community. But can animals also laugh as loudly and amused as we do?

In this article, I would like to explain to you how joyful laughter can also be heard in the animal world - and in which animals we are most likely to see it. Let's go!

The call of the Australian bird hunter kingfisher, also better known as laughing Hans, sounds like a loud laugh, for example. But according to current scientific knowledge, it is not an exclamation of joy. That's the way it is with many animals: it just looks or sounds like they're giggling or laughing. So do they really exist? Animals that laugh emotionally and show joy through their facial features and sounds?

"All animals, except man, know that the principal business of life is to enjoy it."

The answer is YES! That's exactly what primatologist Sasha Winkler and communication researcher Greg Bryant did in their study Play vocalisations and human laughter: a comparative review, found out. The aim was to investigate common evolutionary roots between humans and animals. Among other things, they studied rats, dolphins, parrots and foxes.

The result? The sounds sound quite different in animal laughter, but their Function is proven to be equal. The laughter should finally underpin the friendly intention and prevent a possible escalation.

Tip: Can animals actually cry too? You get the answer in the linked post!

Which animals can laugh?

Previous studies paid particular attention to visual play signals among animals. However, the extensive study led by the team of Sasha Winkler and Greg Bryant focused primarily on Vocalizations - and has revealed that there really are countless species in the animal world that are capable of emotional laughter.

For the sake of clarity, here is a somewhat abbreviated Animal species listfor which the researchers playful laughter have confirmed:

In total, laughing play sounds were detected in 65 animals studied. Especially in vertebrates such as birds, reptiles or fish, it is only possible to analyze the play vocalizations to a limited extent. This is another reason why it is considered likely that countless other animal species exist that can laugh (with each other).

Many animals can also laugh, just like us humans!

Maybe animals don't have a sense of humor or tell each other jokes - but they laugh together, just like we do! Laughter just sounds different, but it certainly looks similar and also has a comparable meaning. Animals communicate to each other and to us that they are doing well and are in a good mood.

"Nothing in the world is as contagious as laughter and good humor."

The findings from the study provide us with important approaches to better understand the evolution of human social interaction. At the same time, they also make us unmistakably aware that Animals sentient beings are that feel joy and pain, just as we humans do.

PS.: Look with pleasure still something in the Animal welfare blog around. Learn now, for example, why animal welfare is so important.