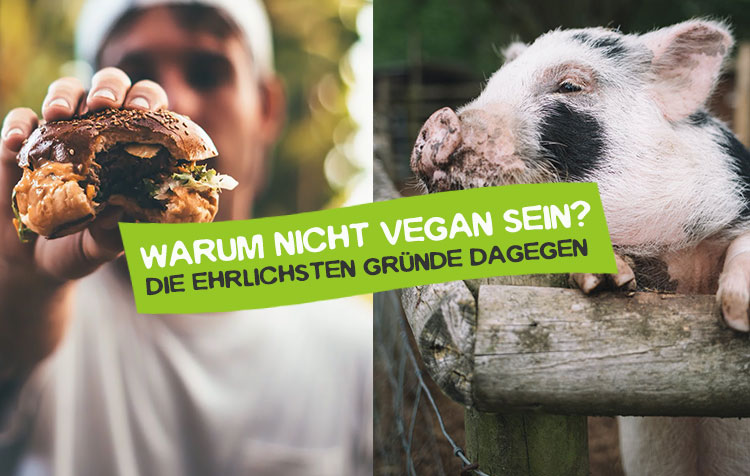 Why not be vegan? 11 honest reasons against the vegan lifestyle and the plant-based diet

Why would you rather not be vegan? If you're just looking for honest and true reasons against veganism and plant-based diets, you've absolutely come to the right place! Per Definition tries the vegan lifestyle - as far as practicable - to avoid all forms of exploitation and cruelty to animals capable of suffering for food, clothing and other purposes. Sounds good, what can you have against it?

Hand on heart! The real reasons for not being vegan are not that Plants feelings and you want to stand up for their rights - or that you expect a protein deficiency and fear suddenly collapsing pale and weak. The truth lies much deeper within everyone themselves.

In this article I would like to present you some credible motives why many people are not yet vegan. If you are one of them, I am pretty sure that at least one of the aspects listed below applies to you as well. Let's go!

Important: This article is mercilessly honest. Please do not feel attacked, but inform yourself further about the respective topic. And if you can prove something to the contrary, I'm open to it. Just leave me a comment with your reference.

1. you advocate cruelty to animals

A pretty good reason for being against the vegan lifestyle is to be in favor of Cruelty to animals to be. Do you also like to hunt and maul animals? You find it acceptable that they caged, artificially impregnated, dehorned and docked, exploited and, last but not least, deprived of their lives. to end up as a sandwich topping? Then you really better not be vegan.

You don't think it's animal cruelty to eat animals? Then look briefly in between the commercially available tools for factory farming or the Documentation Dominion an.

2. you are a comfortable person

We humans are creatures of habit and Change is often very difficult for us. Maybe you just like to swim with the crowd and do what is generally expected and socially accepted. The Differences between law and morality are of no interest to you? Then that is really a very honest reason, leave everything as it is and not being vegan.

3. you believe in the right of the fittest

Cows, pigs, chickens and dogs are not as intelligent as us - and locked up in cages they are also still Much weaker. So why should we not exploit them for our own purposes, killing them and eating their body parts? If you have a moral compass and feel compassion for the weaker, of course you should not follow the right of the strongest. But you love and live injustice? Then you better not become vegan.

Dogs?! If you just startled in wonder at the mention of the popular four-legged friends, this reaction stands for the definition of Speciesism. Because you assume that it is okay to kill certain animals and not others. But the legitimate question is: Why do you want to (let) kill something/someone at all?

Animal feed has to be grown and irrigated, stables and technology supplied with energy, animals fed, transported and slaughtered. You will find this "Detour animal" better than simply consuming the grown plants directly? Then rather not become vegan and continue to support the Factory farming, the main driver of the Rainforest deforestation and of the Climate changewhich, in turn, has several other, the largest Environmental problems of our time Causes.

5. you love the taste of animals and their secretions

Do meat, eggs, milk, cheese or honey taste just too good to you? You love animals but also like to eat them? Then enjoy the body parts of cows, pigs and chickens quietly continue and also treat yourself now and then something Breast milk and bee vomit - and fry chicken menstruation for breakfast. Because a good taste is really a good argument for paying money for someone to exploit and kill an animal for you. After all, what is worth more: a delicious 5-minute meal or an entire animal's life?

You trust the results of the extensive study₁ of the American Dietetic Association - the largest association of food and nutrition professionals - rather not, when they confirm that vegans are a significantly lower risk of heart disease, type 2 diabetes, high blood pressure or cancer have? Then you should not be vegan either.

If you can't stay healthy and grow old want, it's just right to keep eating animal foods with residues of feces, urine, pus, and medications, and spend your well-earned money on animal suffering.

7. you earn your money through animal exploitation

It makes precious little sense to be vegan if you are a board member of the Federal Association of the German Meat Industry you manage one of the largest slaughterhouses in Germany or pursue the profession of a butcher. Better let yourself go on dictated by financial interests instead of your morals and make sure that as few people as possible understand how brutal and bloody your job is.

8. you are a little calf yourself

Another reason for which I could understand why someone would not want to be vegan is that he himself is a baby calf and depends on his mother's milk. Because cow's milk is there for the offspring of cows - and not for us humans! But you just need your daily shot of breast milk from another species - in the form of milk, cheese or butter? Yes well, then better not become vegan - so everything remains as it is.

Tip: All Reasons why vegans do not drink milkI explain this in the linked article.

9. you want to hold on to questionable traditions

You'd rather not be vegan and continue "animal traditions" like the Hahneköppen at fairs, harvest festivals and October festivals, the Chinese dog festival in Yulin, the Waltreib hunt on the Faroe Islands, the German slaughter festivals or the slaughter of the annual Christmas Goose support? Then go ahead and do that. After all, traditions are something beautiful!

But please be aware that not every tradition is worth holding onto forever. At some point, your children will ask why you went along with such a thing - and why you not on the good side of history are.

10. you do not value the welfare of others

Or maybe you just don't want to be vegan because you're look mainly at yourself and you are relatively indifferent to other people. In any case, that would be a mercilessly honest and absolutely credible argument.

Finally, it would be quite disturbing to know that the workers in Slaughterhouses do the work for you under undignified conditions, which you probably would not do voluntarily. The fact that you have to World hunger stop could, if all people vegan would feed, I should rather not tell you. And the Your children's futurewho may have to grow up on a sick planet? Do you care about them? If yes, then better not become vegan!

Tip: It is not only the animals that are worth living vegan. One also becomes vegan for people. I'll explain why in the linked post.

After all, we always want to be honest and tell the truth! One of the most logical, straightforward reasons against a plant-based diet and the vegan lifestyle, is quite simply our habit.

You think that only by consuming meat, eggs, butter and milk you can stay healthy, powerful and strong? Then you'd better not go vegan. After all, you probably already have these foods Eaten 20, 40 or 60 years of your lifebecause your parents have told you and shown you that it is good for you.

Remember, though, that habits are not set in stone - and that old, questionable habits can be replaced with new, exciting habits.

The really real reasons not to be vegan

Surely you've noticed that there's usually a certain irony in this article. But seriously, I have only typical, contradictory things to say, inconsistent behavior in our society. We love animals, but eat them - and are against animal cruelty, but gladly pay for other people to kill them for us so we can eat them. Moral values and actual actions are absolutely out of balance - mainly because of convenience, habit, traditions and because of our taste buds.

If you're not vegan, I'm glad you saw this article through to the end. Because one of the main reasons for not being vegan is actually to put on the blinders and hide possible motives for behavioral changes. In that case, I'm also sure that at least one of the reasons mentioned applies to you. As long as this is not the case, you always have at least one reason for not getting involved in veganism.

I hope that I could help you with this article. Do you have questions, tips or other motives to rather not become vegan? Then feel free to write me a comment.

PS.: Why it is not enough to be vegetarian? In the linked article I explain to you why you stand only with heart and soul against animal cruelty, if you live vegan.