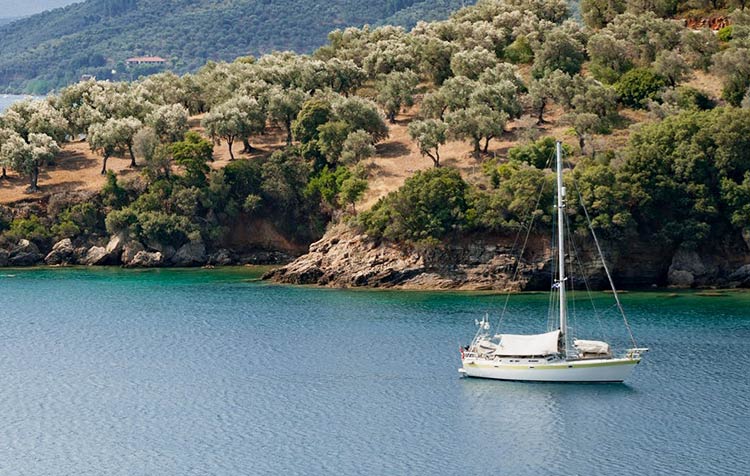 You plan a Island hopping in Greece and want to sail around the Ionian Islands? Finally out of the office, out of the daily routine and into an adventure tour in a new environment. That's what my friends and I thought. Therefore, we looked around for a way to organize a vacation away from the crowded beaches. Since two of us four had plenty of sailing experience, it was quickly decided that it should go to sea. The choice of the vacation destination was not so easy. On the one hand, we were looking for an easily accessible destination where we could experience as much as possible in a short time. On the other hand, we wanted untouched nature without hordes of tourists. Island hopping Greece was then our choice. Among other things, we wanted to go sailing around the Ionian Islands.

Island hopping Greece - Away from the classic tourist islands

We decided on the Ionian Islands west of the Greek mainland. Among other things, because island hopping Greece had made me a Greek work colleague tasty. In addition, we wanted to go sailing at the Ionian Islands. We could not help it. With a ready-made itinerary for 10 days on the sailboat, we left in September with a direct flight to Corfu. We were advised against the hot July and August. September, however, was the perfect time to get enough sun and summer temperatures. Also, the vegetation at this time is still far from autumn.

Our Yacht charter in Greece envisaged seven stages. Among them were the islands of Lefkada, Ithaca, Kefalonia and Paxi. The area offers a varied landscape and a great biodiversity of plants and animals. With less settlement than in the east, the coasts, bays and underwater world are largely preserved in their original form and untouched. The entire vacation from start to finish was simply breathtaking. Some highlights stood out in particular. And not just in the vacation photos. The starting point of our yacht charter was Corfu. Because there we had previously found a sailboat for rent via an online platform that exactly matched our expectations.

One of our personal highlights is Lefkada. The third day of our yacht charter took us from the town of Lefkada only a few nautical miles to Nydri, also located on the island of Lefkada. There we went ashore after long Ionian Islands sailing. We took a cab a few miles inland to the island to see the famous waterfalls. The drive quickly changed from flat coastal terrain to steep and winding terrain. The island rises up to 1,150 meters from the water at its highest point. But we tried to avoid the mountainous heights for now. The cab driver led us along a narrow road. This was lushly overgrown on the slopes and almost resembled a tropical area.

About a kilometer before the destination, the road ended. We had to make our way through lush vegetation. The rocky path, which leads over numerous stair-like steps, is not for bad shoes or even flip-flops. Accordingly, the climb went slowly.

The not so silent nature

There could be no talk of quiet nature here. More and more small streams crossed our path, the closer we came to the waterfall. The streams are inhabited by frogs. Thus the sounds united to a true frog concert, which filled the background with its natural sounds. The waterfall announced itself by high rock walls and a soothing splash. Seeming almost somewhat hidden, a small oasis was found here. To one side it is framed by rock walls, to the other by green vegetation. Among them fig trees, only half of the blazing sun arrives down here.

The water flows down the high, bright rock wall and flows into a basin. The basin is so deep that some even dared to jump from the rocks behind. Besides a few other tourists, we were largely alone here. The majority of tourists here prefer to spend the day on the beach instead of inland. After an hour of swimming fun, we had Greek coffee on the way back. It took a bit of getting used to, since it is served with coffee grounds in the cup. But nevertheless just the right thing for us to return back to our boat after our bathing experience.

Our favorite among the beaches

On the sixth day of our island hopping tour we reached the island of Kefalonia. After almost a week with many impressions and physical activity during numerous hiking and climbing tours, the exhaustion is still in our bones. We therefore unanimously decided to take a beach day. Fortunately, Ithaca and Kefalonia are only a few nautical miles apart. Therefore we arrived at our destination, the beach of Myrtos, already at noon. We became aware of the beach because it was chosen by numerous travel magazines as one of, if not THE top beach of the Mediterranean.

That not all beaches are the same, we realized at the latest upon our arrival. From the sea, the landscape looks more like a huge sand or gravel pit. Around the beach, mountains rise steeply into the air. Thus, hardly any development is possible here, or for nature conservation reasons also not allowed. At the respective ends of the beach, the smooth-looking and overgrown surface of the rocks is interrupted by slides that expose the bare rock face. What may sound unattractive at first turned out to be a place of pure relaxation. So completely without distractions.

If you prefer to see beach bars strung together, you are wrong here. Also, the beach differs in that here you can find a place in the fine sand. Here you do not have to lie on sharp gravel, as too often in the past days.

What was intended as a day of relaxation, ended up as half a climbing tour. Since it was us after a few hours in the blazing sun, completely without shade, but too hot and one-sided. After a real feat of strength, we even managed to climb the steep serpentine paths up to a viewpoint. From here we had a fantastic view down to the beach. Only from here one understands the whole extent of the scenery. Without sunglasses, the clear blue water even stings the eyes. After our descent we were glad to get back on board quickly. The gentle rocking of the waves made us fall asleep especially quickly that evening.

Something good had our early bedtime after all. Spending the next morning on deck with a cup of coffee before the sun is vertical in the sky and the day begins with all its tranquility, brings a whole new life feeling of relaxation and carefree. And on our island hopping Greece tour, we could really use the relaxation in between. After our breakfast of fresh orange juice and juicy figs we bought the day before at a market on Ithaca, we weighed anchor. After just under two hours we had sailed around the northern end of the island. In Sami we had docked. Packed with backpacks, we walked along the coastal path to our actual destination: the stalactite cave of Melissani.

The visit to the cave remains in my memory as one of the most remarkable places of our trip. First we go stone steps through a tunnel behind to the underground lake. Here we were welcomed by a visibly good-humored guide. He immediately took us on a paddle boat to row with the four of us through the cave. In the cave it is not only dark. Also sound hardly spreads here. If it weren't for the splashing of the water while rowing, one would feel completely isolated from the outside world.

The unique place in the world

The picture changed abruptly when we reached the place of the cave with open dome. Here the sun's rays hit the water. The rays illuminate the cave walls in the brightest colors by their reflection. This place, unique in the world, was created in its present form only by an earthquake. It caused a part of the cave ceiling to collapse, marking the creation of a unique natural treasure. When our personal boatman rowed us back to the starting point, we were almost a little disappointed. The place exuded so much tranquility that it was almost like waking up from a dream to return back to the surface of the cave.

Our 10-day Ionian Islands sailing tour with more than eight major stops demanded a lot from us physically. But not in the sense that we returned home after the vacation more exhausted than before. Because sailing around the Ionian Islands definitely brings great fun! And finally we were rewarded with unforgettable impressions of island hopping Greece. From high mountains and deep valleys, sandy and pebble beaches, dream bays to caves, everything was there. Even dolphins could be seen during our sailing trip. Since we all had never traveled the area before, the yacht charter in Greece with our sailboat was the best way to fully enjoy the 10 days.

Also the rental of our boat through the platform Click&Boat was not only cheap, but also very uncomplicated. So sailing around the Ionian Islands was a lot of fun. The next island hopping Greece tour in the area is also already planned!
Do you have questions, suggestions or your own experiences with sailing in Greece? Then I look forward to your comment under this article.

Have fun island hopping in Greece!

PS.: Look you with pleasure in the Nature Travel Blog um, here you will find a lot of inspiration and more unique destinations.

I'm Martin and I love traveling and new challenges, especially as a passionate backpacker and adventure traveler. I come from Germany, but am at home in the world. At CareElite I would like to share my experiences with you.