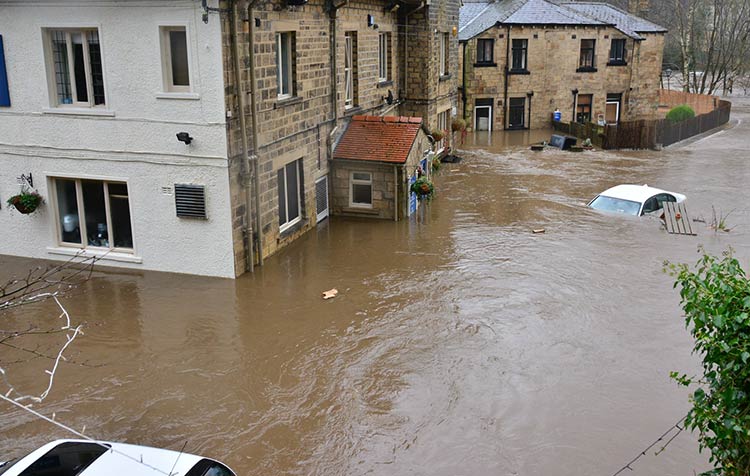 How are climate change, extreme weather, and natural disasters related? Whether it's droughts, floods or hurricanes, we are increasingly experiencing the consequences of global warming firsthand. But how exactly are extreme weather events related to climate change? What serious consequences and impacts can be expected in the future, and what can each of us do to prevent them?

I would like to answer these questions in this article by giving you everything you need to know about weather extremes as a result of climate change. Let's go!

Why does climate change lead to extreme weather & natural disasters?

The link between extreme weather and climate change is relatively simple to explain: The higher the temperature of the oceans rises, the more water also evaporates. And the higher the air temperature, the more water is absorbed by clouds. The logical consequence is extreme weather, changes in precipitation patterns, and an increased occurrence of natural disasters such as floods and inundations.₁ An increased mean temperature on Earth also increases the risk of droughts, forest fires and heat waves.

Difference between weather and climate briefly explained: Weather is the physical state of the atmosphere at a particular time in a particular place. Climate is the statistics of the weather over a longer, meaningful period of time.₂

The Federation of Red Cross and Red Crescent Societies announced in its World Disaster Report that the number of climate- and weather-related disasters since the 1990s has increased by about 35 percent in each decade is.₃

What extreme weather and disasters are a result of climate change?

Four out of five natural disasters such as severe weather, flooding and heat waves in the past ten years (as of 2020) are due to extreme weather and the consequences of climate change.₄ Worldwide, more people are actually fleeing natural disasters and climate events than war and violence.₅

Coral mortality, dying forests, Species extinction are among the consequences of global warming for our planet, which in turn - and thus also the weather extremes - additionally aggravate them. Here, I would like to briefly explain which extreme weather events are to be expected as a result of climate change.

Good To Know: The temperature of the earth does not increase linearly but exponentially. Certain Climate tipping points (e.g. the collapse of the rainforests in the Amazon or the thawing of the permafrost) further accelerate global warming.

Global warming is causing increasing drought in all parts of the world. As a result, the risk of large-scale forest fires and long periods of drought is also increasing. The latter can occur mainly in the form of meteorological (with below-average precipitation and above-average temperatures), agricultural (negative effects on plant growth and the harvest) and hydrological droughts (Water shortage, due to insufficient water supplies in wells, lakes, and other reservoirs) occur.

The impacts of these drought-based weather extremes also jeopardize the food security of the entire world population and therefore exacerbate social problems such as the World hunger.

Hurricanes and hurricanes classified as Category 5 (highest level) are increasing. Uprooted trees, covered roofs - these are the consequences of these climate events. Tropical cyclones in particular are among the most dangerous weather extremes - not least for the poorest of the world's population, most of whom have no suitable protection against these forces of nature.

Due to the thawing of the poles and glaciers large quantities of meltwater enter the oceans. As a result, sea levels are rising and island states and coastal regions are in danger of sinking.

Already, many more coastal dwellers worldwide are affected than previously thought - because more than 100 million people live below the flood line. By mid-century, 450 million people could be affected by sea level rise.₆

Notice: Incidentally, rising sea levels are one of the strongest causes of Climate or environmental refugees, as millions of people have to leave their homes as a result.

FLOODING & Flooding due to heavy rainfall

In Germany, too, we regularly fight against floods and know that in these disasters People die, houses destroyed and entire trucks swept away by the waters can become. Floods occur not only because of increased precipitation, but also because we humans around the world are increasingly intervene in river landscapesby straightening rivers or cutting down floodplain forests. However, heavy rainfall is usually the cause of sudden flooding of entire regions. As a result of climate change, they could occur much more frequently in the future.₇

Do you know of other weather extremes as a result of climate change or have you experienced any yourself? Then just write me a comment under this post.

Extreme weather has always existed - is it really always related to climate change?

Climate change shows us its face through the weather. But of course it is not equally involved in all natural disasters. Nevertheless, it is fair to say that global warming is the main cause of the Probability of weather extremes increased. A tropical cyclone, for example, requires a water temperature of at least 26.5°Celsius. Due to the warming of the oceans, this condition is more frequent, which increases the risk for an increased occurrence of hurricanes.₈

With the World Weather Attribution a group of climate researchers has come together to develop individual Map weather events to climate change in real time can. In this way, the constant uncertainty as to whether and to what extent a natural disaster has resulted from climate change is put to rest.

What can I do against extreme weather and climate change?

The average temperature on Earth must not increase by more than 1.5 °C above pre-industrial levels. Every tenth beyond that Would further increase the scale of weather extremes and environmental disasters. This not only increases the life hazards for those affected, but also the costs of repairing the damage, which could be reduced in the long term with an effective climate protection policy.

In the short term, we can offer our financial, spiritual or energetic support to the victims of environmental disasters. But what can we do permanently to prevent floods, heat waves and storms?

Strengthening the resilience of our habitats

First of all: we will not be able to completely prevent such extreme weather and natural disasters. That is why it is important to increase resilience to extreme natural events. This concerns both the physical protection of each individual, i.e. also the social and economic protection of social coexistence.

But more important is to limit the intensity and frequency of climate events by addressing the root cause. Every individual has the chance every day, to live more climate friendly. There are especially Flights, car trips, our own electricity consumption, our financial investments and our diet which contribute significantly to the personal, ecological footprint contribute. Simply use the following links to make your life more environmentally and climate friendly from now on:

Tip: At this point I would like to introduce you to my book "Sustainable living for beginners" by selecting both all Environmental problems of our timeas well as tips and tricks for a climate-friendly everyday life. The book can be found for example here*.

We are decisively responsible for the weather extremes caused by climate change!

Climate change and its consequences are man-made. And that is precisely why we are also responsible. We need to live in harmony with nature again, not against it. Apparently, the increasing extreme weather serves as the final and decisive motivator for a more climate-friendly and more sustainable lifestyle of our society.

I hope that I have been able to open your eyes with this article about the increasingly tangible consequences of climate change. Do you have any questions or suggestions? Then, as always, feel free to write me a comment.

PS.: In the separate post "Nutrition and the environment" you'll learn how climate change and the way we eat are connected.

₂ Max Planck Institute for Meteorology: What is the difference between "weather" and "climate"? (Accessed Oct. 30, 2012), available at https://mpimet.mpg.de/kommunikation/fragen-zu-klima-/-faq/was-ist-der-unterschied-zwischen-wetter-und-klima. [16.07.2021].