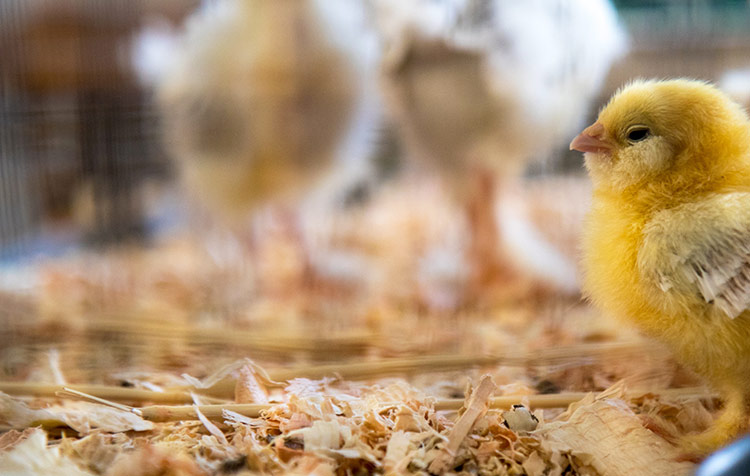 What is actually Chick Shredding (or chick killing) and how can it be that such a thing is allowed in Germany? This question is asked by many people who are shocked by this brutal practice in the breeding of laying hens.

In this article I would like to give you everything you need to know about the so-called chick killing. From the definition, about statistics, reasons, judgments, alternatives to the things you can do yourself in everyday life against the chick shredding.

Tip: If you could use some inspiration in fighting for animals, take a look at the Most Effective Animal Welfare Quotes.

Chick Shredding - What is it?

Under the so-called Chick shredding (or also chick killing) is the term used to describe an unfortunately common practice in laying hen breeding in which male chicks in particular are sorted out and killed after birth. They are suffocated with carbon dioxide or shredded in a machine.₁

In broilers, both hens and goslings have economic value to the industry. In the case of laying hens, industrial companies simply do not see any use for the male chickens, as they produce meat too slowly and do not lay eggs.

In the context of chick-killing, two other terms often come up, the definition of which I would like to give you here as well:

Here, of course, I would like to provide you with the underlying facts, figures and statistics for this article in a short paragraph:

And why are about 45 million chicks killed every year? The reasons and causes for this practice in laying hen breeding are mainly based on economic factors, which I would like to tell you briefly below.

So farms simply see no use for the young, male chicks. And so the industry insists that chick killing will remain permitted until research can provide alternative methods.

Judgment of the court on chick shredding

The discussion about chick killing mainly refers to the first paragraph of the Animal Protection Act (TierSchG), which reads:

The purpose of this law is to protect the life and well-being of animals out of man's responsibility for them as fellow creatures. No one may inflict pain, suffering or damage on an animal without reasonable cause.

In its press release 47/2019 of 13.06.2019, the Federal Administrative Court announced that the killing of male chicks will only be permitted in Germany on a transitional basis. In this ruling, the court refers to the fact that an economic interest for a high laying performance is not in itself a reasonable reason for killing male chicks.₇

As early as 2013, the Greens dared to make the first move to legally prohibit the killing of male chicks. In May 2016, the Higher Administrative Court of North Rhine-Westphalia then ruled that the killing of day-old chicks complies with the Animal Welfare Act.₈

Roosters do not lay eggs and are slow to put on meat. As long as the industry sees no added value in the male chicks and the law continues to allow it, you will continue to gas or shred the chicks. But the recent court decision of the Federal Administrative Court of 13.06.2019 has yes already included the alternatives available in the future and already in a test phase in the judgment. The following three alternatives are currently or will be ready in the near future:

There are some initiatives that offer eggs entirely without killing chicks and instead raise and fatten male chicks. The providers compensate for the economic losses incurred by charging a higher price per egg. Eggs from cross-funded rearing of male chicks are thus an already existing alternative against chick shredding.

Politics and industry are pinning their greatest hopes on the progressive development of technical processes. With these, it is possible to determine the sex of the animal already in the hatching egg, so that only the females are hatched. In this process, a laser burns a tiny hole in the shell in order to extract fluid and determine the sex. This endocrinological method of sex determination is already hatching 30,000 chicks a week.₉

However, even this technique is still controversial, as the exact time from which embryos have a sensation of pain is still undetermined and it can only be safely ruled out that the chicks feel no pain only before the seventh day of incubation. Since the so-called Seleggt procedure can only determine the sex of a chick between the 8th and 10th day of incubation, the German Animal Welfare Association rejects the method.₁₀

What to do about chick shredding?

As long as chick killing remains allowed in Germany, there are still some things you can do in your everyday life against this unfortunately common method. In the following I would like to give you three crucial things to contribute to the solution or reduction of the problem.

You can create a Signature campaign or join an existing petition against chick shredding. Especially with such ethically questionable topics, you will very quickly receive a lot of support from the population. For example, you can join the following petition.

If you want to do something about chick killing in your everyday life, the Start in a vegan diet with the Waiver chicken eggs really the best and most effective alternative. This environmentally friendly diet not only helps to calm the ethical concerns surrounding this unfortunately common practice in laying hen farming, but also has an incredible overall effect in the fight against the Climate change. If you want to know more about it, feel free to check out the article about the Connection between nutrition and climate inside.

Tip: In the article Stop climate change you will also receive many tips on how you yourself can have a positive influence on the world's climate. The article Shape nutrition sustainably will give you decisive tips for the changeover.

Even without giving up hen eggs, you can counteract chick-shredding when buying eggs in the supermarket. Many retailers offer eggs from initiatives that deliberately forego this practice for ethical reasons. As a customer, you can then expect a price per egg that is about 4 cents higher, according to the North Rhine-Westphalia Consumer Center.₁₁

The initiatives are quite clearly visible on the packaging. Therefore, when buying eggs in the supermarket, just look a little closer if you do not want to give up eggs, but still want to make an effect in the fight against the killing of chicks.

Chick shredding in the future?

Fortunately, as you could see in this article, chick killing will not (be allowed to) be practiced in the near future.

However, since this ethically more than questionable method continues to be used for the time being, you can positively counteract this practice, for example, through petitions, the switch to eggs without killing chicks and, above all, a vegan diet.

Do you have any questions or suggestions about chick shredding? Then feel free to leave me a comment below this post.

PS.: Do you want to get more involved in environmental protection? Then take a look at our sustainable job portal where you will find fantastic jobs with added value for you, our society and our environment.