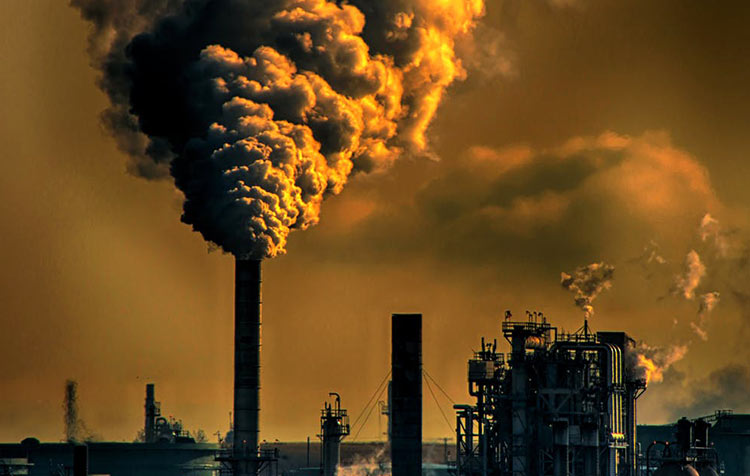 Air pollution - cause, consequences and solutions of the environmental problem

In this article, in addition to the definition, I would like to show you statistics, causes, consequences and possible solutions in the fight against air pollution.

What is air pollution?

By air pollution is meant, in general terms, the contamination of the air compared to its normal state. A really clean air is normally composed of 78% nitrogen, 21% oxygen, 0.9% argon, and 0.04% carbon dioxide. together. In this state, our ambient air would create ideal conditions for a healthy life.

The following pollutants are basically assigned to air pollution:

To what extent we humans blow these pollutants into the air, you will now learn in the next paragraph.

We know that we pollute the air we breathe. But to what extent are we doing this? To find out what we can do about the air pollution of our planet, we should also learn more about the causes of this environmental problem.

We contribute to air pollution by doing the following things:

While the industry mainly uses sulfur oxides and CO2 into the environment, traffic is particularly responsible for the formation of nitrogen oxides and carbon monoxide. Agriculture also plays a decisive role in releasing nitrogen oxides, but also ammonia and methane, into the atmosphere.D

Basically, it can be said that we are on the right track in Germany - because we have been able to significantly reduce the pollution in the air. But that doesn't mean we can rest on our laurels. Above all, it is important to work together with developing countries to combat air pollution. The following statistics provide a little insight into why:

There is a big problem with air pollution worldwide. In the next paragraph, you will find out what the consequences are.

How we deal with our air is of course not without consequences. Even if air pollution in Germany is generally declining, people and the environment in many developing countries suffer particularly from smog. The environmental problem, which is almost exclusively caused by us humans, ultimately harms our own health and also our environment.

Consequences for our health

Even if air pollution is barely visible, the impact on our Health should not be underestimated. The higher the exposure in your environment, the greater the risks of suffering from the following health complaints.

These effects of unclean air provide good reasons to take action against air pollution and reduce your own pollutant emissions.

Unfortunately, air pollution has significant negative consequences for our natural environment. These contribute, for example, quite decisively to the Climate change and are the reason why we currently have to do everything in our power to Stop climate change.

These consequences for our environment are attributed to air pollution:

Behind these consequences hangs a long rat's tail of further problems for humans, animals and nature.

Anyone who now still gets the idea that air pollution is not a serious problem may have an economic interest in keeping the air clean.

These are the consequences of air pollution from an economic point of view:

This overview should make clear that air pollution is a problem of all people and all sectors. Whether it is a private household or a business corporation. In the end, every living being on this planet suffers from this environmental problem.

What to do about air pollution?

In order to do something about air pollution, it is basically important to divide the environmental problem into geographical, substance-related and problem-related. This is because not every region has the same level of air pollution and not everywhere emits the same sheep substances.

In the following, I would therefore like to create sensible approaches to solving the environmental problem of air pollution, also in relation to this.

Solutions in the private household

Even if not all of us are farmers or work in industry, everyone can do their part in the fight against air pollution in their private lives. The following approaches are recommended in private households for this purpose:

In principle, however, the Zero Waste Lifestyle and the minimalist lifestyle naturally play a major role in the fight against air pollution. After all, the fewer products that have to be produced, the lower the industry's emissions of pollutants.

Even if we can do in everyday life and very much for a clean air, the greatest responsibility lies with the policy. There, the following measures and decisions can contribute to solving the environmental problem:

Voluntary measures have never really brought about a change. Therefore, to further stop air pollution, clear laws & bans as well as stricter controls & penalties are needed above all.

Tip: At Minimize air pollution I've put together a detailed article with valuable tips on how to fight your personal share of the environmental problem of air pollution.

Together against air pollution

As you can see, air pollution is one of the biggest environmental problems of our time. But each and every one of us can do something about it, educate people and set a good example. Because as varied as the causes of particulate matter and other types of air pollution may be, there are just as many solutions to the problem.

PS.: In the Environmental protection blog you will find more information about the environmental problems of our time. Maybe you are also interested in plastic avoidance in everyday life - then I recommend you the article about the plastic free lifestyle.